As with the lists created in other forums, let’s have a topic to capture what you would like to see for new features or enhancements to current ones in AfterShot Pro. The development teams carefully review the ideas and comments in these lists and use them in prioritizing enhancements to the product.
Craig Copley
Top

Having just bought my upgrade as a long-time Bibble user, I generally think things are off to a good start, except with importing into the catalogue.

Bibble 5 had a feature to allow some flexibility in the creation of folders created within the catalogue - those options seem to have been taken out, and the default we're left with is a bit odd - creating unwanted folders for some (but oddly not all) parts of the path. The whole point I want to use the catalogue is so I don't have to drill down a file system hierarchy to find my files (see screenshot attached).

So my feature request is to add back in some flexibility in this (it doesn't have to be the way Bibble 5 did it) so that the arrangement of photos in my catalogue doesn't have to have any bearing on the filesystem. E.g. in Bibble5 I was able to combine files from multiple folders (representing photos taken on different cameras, but on the same trip) into a single folder off the root of the catalogue, and that was very neat. Also I would expect to be able to reorganise photos within my catalogue without them being moved on disk (again, otherwise why not just use file system mode) - at present I find if I try to "correct" the structure which is generated then I end up with a worrying warning about moving the actual files - eeek!! 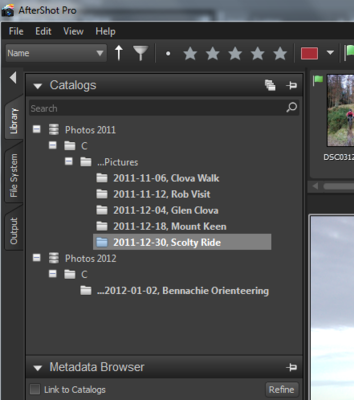 As a beta tester I said from the very beginning:

And I completely agree with Matthew B about the Catalog structure.
Last edited by kaymann on Thu Jan 12, 2012 9:01 am, edited 2 times in total.
Top

A Wish to the forum admins: Can you add Linux to the operation system list?

Thank goodness I'm not the only one who has complained about how the catalog display is structured, something I've written about from day one of Beta testing. And my display shows the whole path drilling down from C:, unlike the simpler version with "...Pictures" that shows in the screen shot Matthew posted.

I have also asked:
- that I have a choice to see or not the sub-keyword files when I select a keyword - I may use only the keyword in some images and subs in others.
- capability to change the order in which keywords are presented in the Keyword Sets in Metadata
- ability to select images without any keywords, something like a [blank] function.

Thanks for the info Can we make this a hot icon...
Top

kaymann wrote:And I completely agree with Matthew B about the Catalog structure.

The catalogue importing behaviour exemplified by Matthew B earlier in this thread and also discussed here http://support.bibblelabs.com/forums/vi ... 66&t=19702 and here http://support.bibblelabs.com/forums/vi ... 66&t=19701 must definitely be addressed - in order to make the importing feature useable again. Even though the DAM capabilities are not yet fully implemented, the way the present importer stacks things with unwanted path components into the catalogue makes any decent use impossible in my opinion.

Apparently, this very behaviour has been deemed unwanted by at least two beta testers - MarkZ, earlier in this thread, and afx in the first link above - and now also by a number of other users, indicating that Corel should go back to the drawing board and add some options for the user how to structure the source path to the image directories - so the catalogue import path can be kept clean and possible to overview, and, hence, the catalogue function useful.

As Matthew B has shown in his picture above, that is not the case now.


Also, please add Linux as one possible OS choice in your registration procedure. Corel Corp has, after some sad and failed attempts earlier in its history, once again a Linux compatible piece of software in its portfolio, and it would be nice if they could treat a whole bunch of new customers, among them quite a few Linux users, coming from the Bibble camp, in a nice and welcoming manner.


kaymann's list above is very valid for some additional wishes from my side.

vieledinge wrote:A Wish to the forum admins: Can you add Linux to the operation system list?

I am a little puzzled by this. Where exactly do you want the reference to Linux? On the Corel website ASP page, the 'Tech Specs' already show in some detail that it is available in versions for PC, Mac and Linux. Moreover, when I bought the product yesterday from the Corel website, I was offered the choice to download the program in the same three operating systems.
Ken Berry
Top

Ken Berry wrote:I am a little puzzled by this. Where exactly do you want the reference to Linux? On the Corel website ASP page, the 'Tech Specs' already show in some detail that it is available in versions for PC, Mac and Linux. Moreover, when I bought the product yesterday from the Corel website, I was offered the choice to download the program in the same three operating systems.

When you register as a new user, you *must* choose an OS - in practical terms of any windows flavour.

If you go to your User Control Panel for an already created account, and then have a look at the Profile tab, the same choices are listed - and you must choose one of those listed.

EDIT:
That is, when you register for access to these forums, not for the ASP product itself!


EDIT2:
Your new OS X users would probably also be very happy to not be forced to be listed as Windows users...

Ken Berry wrote:I am a little puzzled by this. Where exactly do you want the reference to Linux?

This is about the Forum profiles that one is forced to enter when registering in the forum.
Why am I forced to select somethig as obsolete as a system drive letter or an OS that does not match the product I use? A Very narrow view.
It misses Linux and MacOS.

Return to “General Questions & Getting Started”