For discussion of the Corel products listed below ONLY
https://forum.corel.com/EN/

by infinitempg
Running PSP 2018 on my Dell with Windows 10 x64 and have some weird issues. I can edit a file and do a save as and it works fine.... UNLESS I am trying to save it to my Pictures or Documents folders. If I open a file from my Pictures folder, edit it and do a save I get an error message stating it couldn't overwrite the file and to check my permissions.

Then when I click OK I get an error that it couldn't write to the file.

Also, if I open an image from Pictures with Photos, FastStone Image Viewer, Paint, or any other application other than PSP 2018 and it WORKS PERFECTLY. I only get those errors when editing and trying to save with PSP 2018.

Any idea why this only happens with PSP????

by hartpaul
A friend of mine had a similar situation except that he could not save an image to the Desktop whether a previous image or a new dummy image. The image was loaded into Paint and a similar error occurred suggesting that the Desktop (and other folders were protected) . However Irfanview had no problems.
I eventually traced it down to the antivirus program AVG which used a new thingy called shields to stop files being saved to the normal folders I was able to check in the Antivirus program and locate the section where PSP was made an exception.

What antivirus program are you running?

Do you have two or more accounts on your computer? If you have installed PSP with an account and run it with another account, the permissions to write may differ.

by hartpaul
I also found that switching AVG off and changing to Windows Defender avoided the errors.

But following up I found that my settings in AVG showed: 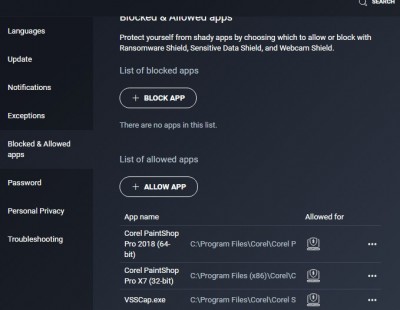 I then opened PSP 2018 loaded an image from Pictures folder made a paintbrush addition and then did a Save As with a 2 added to the name. I received this message from AVG: 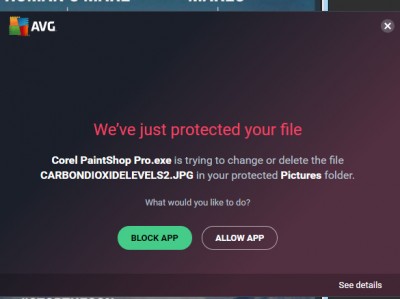 I clicked Allow Apps and received this message: 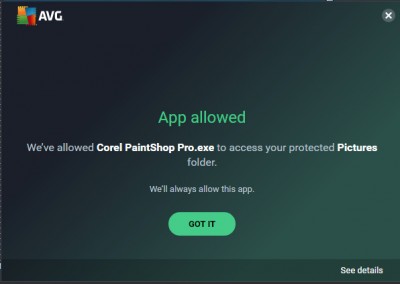 The file was then able to be saved to Pictures and doing the same with an image from Documents , it saved without any further interruption from AVG.
Looking at the Exceptions in AVG, it now showed: 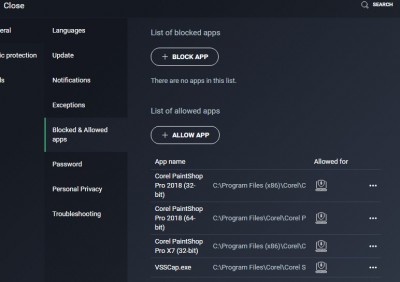 by infinitempg
Totally bizarre. Just did the same thing. Tried to add PSP to allowed apps but AVG closed. Ran PSP, opened an image and did a Save As to the Pictures folder with a new name and got the same AVG popups. Selected Allow App and now it saves every time. Really freaky but IT WORKED!!!

by hartpaul
Glad your problem is solved.
It seems like Corel these other software manufacturers make new additions to their programs with unforseen bugs that affect others.

I once used Trend Micro which many years ago was rather simple, then it started making additions to the extent that it took over more and more of what you could and can't do and making the running of windows more and more difficult. Eventually I gave it the flick and then went for Avast and AVG settling on AVG. Now AVG is starting to take over more and more setting up resident shields to heavily protect changes to various folders - System 32 folder / Windows folder I can understand , but the Pictures and Documents folder containing mostly data files that the user and user operated programs add is becoming overkill. Might be time to start looking for new AV programs if this continues .
All times are UTC+01:00
Page 1 of 1