I've been experiencing a number of issues with this version- It could be any number of reasons, ranging from the OS (64-bit Win 7 Ultimate) to my hardware config to who knows what.

1) It starts up really slow... I double click the icon on my desktop, the window opens, then I get the "busy" mouse icon for at least a minute before things "settle down" and I can finally click "File > Open..."

I read that this could have something to do with the "Organizer"... My .jpgs and .pngs are organized the way I want them- what can I do to force PSPP X3 to NOT start the Organzier by "default"? I really don't relish the idea of jumping to the Task Manager to kill a process that I should have the option to allow or not from within the program.

I mentioned having to click "File > Open..." in the toolbar... PSP X2 on my WinXP system was great- opened fast, I could drag and drop files from Explorer folders or the desktop to the "workspace" and they'd just open... I can't do that anymore- I try to drag a file from the desktop to the workspace, and I get the "Do Not Enter" mouse icon (circle with a line though it). It's frustrating as hell.

2) Saving images is even slower. When I save a file, the "busy" mouse icon (that rotating circle that Microsoft used to replace the hourglass) that lasts for well over 3 minutes... for the past week, when I save an image I usually go open a browser window to Armor Games and play some flash game while waiting.

3) Copy/paste selection does weird stuff. Let's say I have an image open and I want to cut or copy a selection from one location to another in the same layer I drag a box around or click with the magic wand and the selection is made... I click and drag the selection to where I want it to go, and it becomes a "floating selection" in the layer palette... I right-click somewhere in the image to "de-float" the selection, and the bottom 1 or 2 lines of pixels disappear as if erased.

This is a simple example here- This is a black "dot" on a Raster Layer; checkered area is transparent/has no paint on it... Image is 100px x 100px, zoomed in to 200% to show detail (ALT+PRT SCR to make a screen cap then cropped). I drag a box around half the dot using the selection tool: 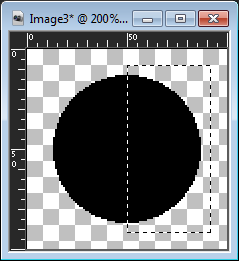 I left-click and hold on the selected area (mouse becomes a "move" icon with four arrows) and shift it one pixel to the right; selection conforms to the "painted" area, and becomes it's own "floating selection" layer: 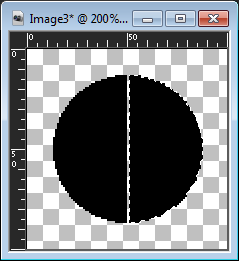 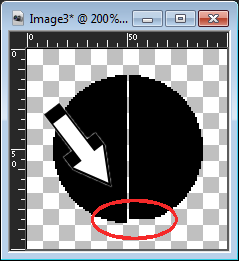 I do have an OS configuration that's different than most- In order to get the most "life" from my solid state drives, I reconfigured my \Users account folder to default to the D:\ drive, rather than reassigning the "Documents" folder (and other system folders) to a different drive or drives. I wonder how much PSPPX3 stores in the user's %AppData% (or other user-specific) folder... But I used to run PSPPX2 on this same system easily without issues (Hardware config was the same, with \Users folder moved to the D:\ drive, but OS was Windows Vista Ultimate 64-bit).

Should have just said "I'm just at a loss with this."
Top

Okay-- been experimenting with some settings, and may have a work around for the File Save lag... Like I mentioned in the first post, I know where all my images/pictures/drawings are, and have no desire to have some automated "Organizer" program using up CPU cycles scrubbing my hard drive for images, so....

Plug in any external drive(s) you have (Windows will automatically assign a new drive letter).
9) Repeat steps 5 and 6 for the new drives (My thumb drives get assigned letters I:\ and L:\).
10) Click "OK"

Once I set the Organizer to not scan any media for image files, it seemed the File Save process was 1000% faster- it just saves the file where I want it and it's done.

This doesn't really address the issue of the Organizer program loading into RAM when PSPX3 is started, but at least my quad-core system doesn't drop down to the speed of a K6-2 233 MHz dinosaur.
Top

Have you applied the patch from Corel's site for X3?
Regards, Dan

"Smoke me a kipper, I'll be back for breakfast."
Top

Popup appeared as soon as I started the program, and I DLed the patch immediately....

Clicked "Help > Check for Updates...", and the dialog box says "There are no updates available at this time."

UPDATE: Regarding the File Save lag "fix" I posted... It's running slow again. I dunno what's going on-- Sometimes it just saves, other times it takes 2 or more minutes before the "busy" icon changes back to a normal mouse.... click on the PSP window too many times while the icon is "busy" and you end up getting the "Paint Shop Pro Photo X3 is not responding..." warning.
Top

Start PSPPX3. After it's loaded press Ctrl+shift+ESC, this will bring up your task manager.
Select the processes tab. Sort by name.
Find "MediaCataloger.exe" and end process.

If this helps you can try to rename MediaCataloger.exe so it wont start automatically in the future.
Regards, Dan

"Smoke me a kipper, I'll be back for breakfast."
Top

It may also be the fact that the data base is corrupted or confused If I remember Correctly its in C:\Users\Trev\AppData\Local\Corel Delete the thumbs cache folder and the imageDB.db Now the organiser will have nothing to load. I don't bother with the organiser but keep My pictures open and just move the cursor to the task bar to activate it find the image then drag it down to the X£ icon which makes it active so that i can drag into the workspace.
The update is corect It started as beta and then got the 13.01 name added
Top

As Trev has mentioned, the usual cause of a slow down like that is a corrupt Organizer database. The best way to fix that is to delete the old database and let PSP create a new one. X3 and X2 use the same database. XI used a different database, but X2 and X3 check for that and use it as the basis for their own when they create a new database. It is often a corrupted XI database that is the root cause of X2 and X3 problems, so it is important to check for and delete any old XI database. That could be hanging around from an old trial version of either XI or Snapfire.
There are two similar sets of instructions for deleting those databases at the Corel Knowledge Base -
http://corel.custhelp.com/app/answers/d ... _id/762111
http://corel.custhelp.com/app/answers/d ... _id/762173
Tim Morrison
C-Tech Volunteer
Top

I'll try some of these suggestions, but having a corrupted database suggests there was a database to corrupt. These extremely slow startups and file saves began as soon as the program was installed on a system that did not have any version of PSP installed on it... Well, okay-- if such a database could survive in any form after both a reformat and a broken RAID array, then yes, Paint Shop Pro Photo X2 used to be installed in this computer when I had Vista, and it could very well become corrupted.

I upgraded to Windows 7 about a month after it was released, and couldn't find my PSPX2 disc to reinstall the software... so I'd been using the free Paint.net program.
Top

df wrote:Start PSPPX3. After it's loaded press Ctrl+shift+ESC, this will bring up your task manager.
Select the processes tab. Sort by name.
Find "MediaCataloger.exe" and end process.

If this helps you can try to rename MediaCataloger.exe so it wont start automatically in the future.


trev bowden wrote:It may also be the fact that the data base is corrupted or confused If I remember Correctly its in C:\Users\Trev\AppData\Local\Corel Delete the thumbs cache folder and the imageDB.db Now the organiser will have nothing to load. I don't bother with the organiser but keep My pictures open and just move the cursor to the task bar to activate it find the image then drag it down to the X£ icon which makes it active so that i can drag into the workspace.
The update is corect It started as beta and then got the 13.01 name added

imagedb.db folder had 172,300 items in it before deletion- over 2Gb worth of data.

In spite of both of these steps, It still took 1 minute 22 seconds between double-clicking the icon on my desktop and the busy icon to stop turning so I could actually load a file- and I'm still annoyed that I can't simply drag-and-drop a file to the workspace to open it- I used to be able to drag a box around multiple files and drag them all to the PSP window and they'd all open- sometimes over 100 images at a time. Why can't I drag and open even one image now?
Top

I too have the cut/paste issue. Is there a fix. When I select an area, copy it and then try to paste it the bottom most row of pixels in the original image is not updated. It is very frustrating when I'm just trying to get something simple done and it ends up taking an hour out of my day I don't have.
Some pics of me sys.

Sorry for the delay.

@ This problem ("de-float" the selection... and some of the selection just "disappears") has been logged as bug. I hope a patch will solve it as soon as possible.
I work for the Corel UK Support. I will not give technical support through this forum and my answer is only related to this thread.
Top

Hi, I'm sorry to nag about this, but how much do you estimate it will take to fix this severe bug about the defloating selection eating the bottom line of pixels? It's making the performing a simple action a pain.

I've seen that also flattening a layer to the bottom did the same, removed the bottom line of pixels.
Top

If You have not yet discovered it Here is a work round. After making the selection instead of float. promote to a new layer then make original layer active and delete . Now use move or pick tool to move the top layer. No missing pixels. OK its a few steps more but you could script it and set it as a bound script called Float
Top

@ Crichton: I've no idea when a new patch will come out but I know that this pixel problem was reported more than once as a bug and that means high priority.

@Trev Bowden and all others: To be honest, I haven't understood why so many users go that "float" way. As far as I understand the sense of the procedure correctly, it is made to get a second object identical with the first one. Why isn't simple copying and pasting enough? What is the target with that float way?
I work for the Corel UK Support. I will not give technical support through this forum and my answer is only related to this thread.
Top
Post Reply
57 posts