Hello
I used PSP from JASC version 4 and up to 8 & 9, then i found Photoshops functionality better and have used that since.
I still use 9 for the Browser and also features as the Mesh warp, and have many times looked for new versions of PSP to see if it now fits my use.
Right now after a few things are solved, there is just one thing remaining, and that is the command 'reveal all'.
I have searched for it here, and the search engine chose to ignore 'all' so I didnt get so far.
Trim and reveal all are very used commands as i juggle with lots of photos to make my collages.
I hope there is some easy answer. Figuring out the correct size with 'canvas size* is no option - it is a definite turnoff.
Top

For those who are unfamiliar with Photoshop it might help if you told us what 'trim' and 'reveal all' are supposed to do.
Top

Here is a quick simple video demonstrating Reveal All and Trim in Photoshop: https://www.youtube.com/watch?v=pe9_wNZffyY

I know of no such commands inside of PSP. Scripting might be able to help though.

Trim, you can use the Crop to Selection option, you just need to make the initial selection. If the background is transparent it's as simple as using the magic wand tool, and using the "use all layers" option. Select the opaque areas and it should select everything but the transparent portions. Then Shift + R to crop to selection. Unlike ResizeCanvas this is destructive and will crop actual data if it's selected.

As for Reveal All, PSP definitely doesn't have an equivalent.

Though something similar might be able to made with a script. It's currently early in the morning and my brain isn't working so I cannot prove it. But a simple script would select each layer, get its position, and then resize the canvas to fit the widest portions. I made a test script as a proof of concept, it's not been tested in a variety of scenarios so I cannot make any promises on whether it's functional as is.

Just unzip the script into the Scripts-Restricted folder, and run it. It works like this, it selects the bottom layer, then selections every layer until it reaches the top, on each layer it grabs the layer rectangle and if the layer is off the canvas it records that difference. It then calculates the final image size and calls Resize Canvas for you filling in all of the data. If it works, it'll be slightly slower but still a near equivalent to RevealAll. If it doesn't work then it'll need to be tweaked to match your needs.
Top

Thats fantastic - to get it written as we speak. Thank you so much.

Yes i use 'crop to selection' for 'trim', but it is not optimal. Trim could be called Trim away transparency or trim down to content,
Using trim is one operation- one finger hit, while crop to selection needs finding Crop tool, setting the square at usually a specific pixel lines, then hit ShiftR. So i sure am fond of trim, and i found it in a pack called script arsenal 2015. it showed up to be not so useful, as it only considered the layer selected. When i selected both layers it chose the top layer. So it can only be used when a single layer is selected which dominant at all four sides or else it will cut.

I dont understand why this issue has not been up or investigated more earlier. I begin with a photo and if i add something larger which happens all the time, i then need reveal all. And then i reposition or rescale, and i need trim. I cannot believe this is a very strange way of using paintshop.
I have now tested the 'reveal all' script and there is more to do with the programming. The way it works now - lets say i have a image 1000x1000px and add 200x200px image as a new layer and place beside the first at right, that is outside of the image. I hit Reveal all and it finds 200px extra are needed, but distributes this evenly on both sides, making image 2 still have 100px outside in the dark. I hit one more time and there is another halving of the outside placement, but now also there is some adding of empty space on the bottom, but not on the top. And also - I tried to put it in PSP 9 and it didnt work at all. You probably could have told me so.
But it all brightens, i look forward to start using the photoediting tools and also the many good painting options psp have. I never stopped missing them.
Top

I'm also using both Ps and PSP, since I find some things are done easier in the former and others in the latter. I don't really have a solution for your Trim and Reveal question, but regarding the following:


Stein59 wrote: ↑
Thu Jul 22, 2021 5:26 am
[snip]
So i sure am fond of trim, and i found it in a pack called script arsenal 2015. it showed up to be not so useful, as it only considered the layer selected. When i selected both layers it chose the top layer. So it can only be used when a single layer is selected which dominant at all four sides or else it will cut.
[snip]

later versions of PSP have a "Merge Visible To New Layer" command. Right-click on the top layer, select that command and a new merged layer will be created at the top of the stack. It will be selected too. This should address the problem you describe in the quote above.

PS. I would definitely add the Trim and the Reveal operations to the PSP wish-list topic (or any other place Corel looks for suggestions)
Good Unofficial PaintShop Pro Tutorials: Creation Cassel • Make Shop Pro • HEC Image Editing • LeviFiction PSP Basics
(plus my own Gimp & Stuff)
Top

I made a small mistake when making the script, I left it auto-centering the result horizontally which only works half-way. I just tested it with several configurations, it seems to calculate most things properly. I also made it work with vectors since vector layer size was being reported improperly inside of PSP.

Trim is pretty easy to do without a script, but I created one anyway. This one won't let you choose which side to erase as I don't have access to that through scripting but it will work pretty closely to Photoshop's Trim method if all sides are selected to be trimmed. Here is a video showing them side by side.

And here's the Trim script

The Trim Script needs to be unzipped into your Scripts-Trusted folder as it uses libraries to create the UI you see.
Last edited by LeviFiction on Fri Jul 23, 2021 5:28 am, edited 1 time in total.
Top

Not sure I am understanding the problem here.
I watched the video from the post near the top and saw the examples of Trim and Reveal All and considered that we already have the ability to get the same results with PSP without special commands to further bulk out an already congested program. 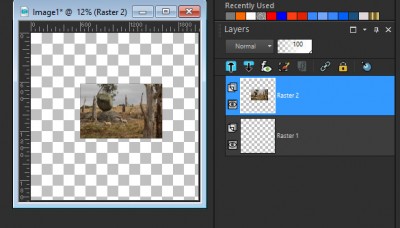 Now using this image you can use the Move or Pick tool to move it around on top of the transparent layer. That image can be trimmed by (untabbed tocuments) just dragging its layer thumb ont an empty part of the workspace - no menues and choices required.
But wait there is more - even if you Merge down and have it fixed on a part of the transparent layer , you can still do the same thing.

Reveal All:
I set up this image- I have included a white layer (layer 5) and the bottom transparent layer and by switching visibility on or off you can match the actions in the video re showing the amount of drop shadow. 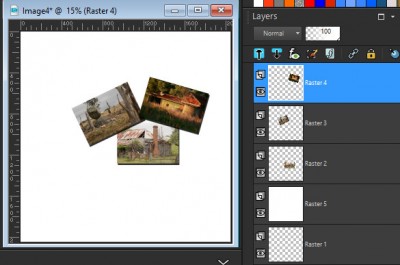 To me this is a lack of pre-planning. Just make a transparent layer large enough to hold all the images, add your drop shadows and other bits and pieces, move to where you want it arranged . You can then crop the image as you wish, or merge visible and then drag to a part of the work space and have the same effect.

The demo video doesn't show it but Trim also works with multiple layers. So it can trim down the image canvas to match the visible layers without having to merge them first or create a whole new image in memory.
Top

Both scripts are working well now. It just remains for me to record them in action and assign hotkeys, and they become one hit wonders.
Thank you so much for doing this. It changes my future.

HartPaul : It sounds interesting what you say, but i dont get it fully. With dragging into workspace, do you with workspace mean the image which is worked?

No i dont plan much, i see what i need when i come there. And good photographs are these days usually 5000x6000px large and larger.
When you have layers the size adds up fast and i try to keep my work well within the limits of the pc. So i am used to trim when i can.
Top

HartPaul : It sounds interesting what you say, but i dont get it fully. With dragging into workspace, do you with workspace mean the image which is worked?


Go to Windows > Tabbed Documents and make sure it is unticked.
Now any image can be scaled down so that it only occupies a small part of the workspace.
With an image eg picture or a picture tube on a transparent background - you can auto crop to just the parts of the image (like Trim), by dragging the thumbnail from the layers palette onto an empty part of the workspace.
Using a number of different images you can also use the same procedure to drag and drop the thumb of one image onto the open image of another image in the workspace. This does the same as a copy and paste as new layer without all the Edit> Copy , and Edit > Paste as new layer.
Systems available Win7, Win 8.1,Win 10 Version 1607 Build 14393.2007 & version 20H2 Build 19042.867
Top

I try to repeat your actions but i only get a new layer. Which btw is a good thing. For i have wondered how to miss the dialog box appearing when pressing the new layer button. I always want raster layer. No surprises here.
Top

Make sure that Tabbed Documents is unticked.
These diagrams show the process. First drag and drop with a picture tube - can be done with any image on a transparent background that you want to remove or Trim. 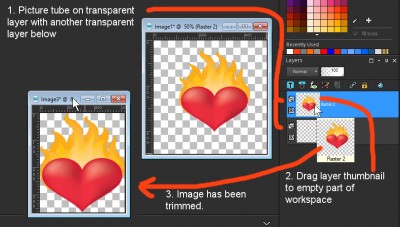 Now with two images , adding one image as a new layer on the other.

and the result is 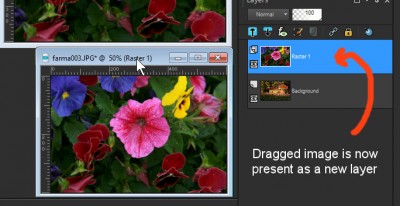 Holding the SHIFT key while clicking on most commands will run them silently with last used settings. Including New Layer. I often use this to speed things up.
Top

Shift click sounds like the easiest solution, but it wasnt completely free. When i do so in corel2021 it makes a drop down menu where i can choose raster. Holding down shift while pressing raster, makes it omit the dialog box.
So i have to go for Cathys solution for a one click solution.
Unless i use psp9, then i can hit new raster layer button while holding shift, then its done in one click. No need for making scripts.