Hello people, I am new to this forum because I have a problem with WinDVD Pro 12. I live in Austria, Europe.

I registered the software end of November 2016 for my Asus notebook to be able to play Blu-Rays. Asus didn't provide a Blu-Ray player for the notebook.

Anyway, after installing WinDVD I played a few Blu-Rays in December and everything worked fine.

After the holidays I wanted to play again Blu-Rays in January. The first Blu-Rays I wanted to play were those from the sci-fi series "UFO", region "B", fitting Europe. After starting the Blu-Ray, it said that it cannot play it because my Blu-Ray player doesn't support region "B" Blu-Rays. So I checked the preferences of WinDVD and saw that under "Region" > "Blu-Ray" there was NO region selected and the remaining changes counter was at 0 (zero). I must provied that WinDVD NEVER asked me for a region code during the installation and I NEVER changed the region code.

I can change the DVD region code in windows, but not the Blu-Ray region code.

I contacted Corel support and had email conversation with them, they told me to remove the software, delete all folders related to WinDVD, re-install it, etc. But nothing worked. When I re-installed the software, I didn't have to enter the registration code because it already showed me my registration code during installation, that means there must have been some remains of the software on my notebook, maybe in the registry? And the remaining changes counter for the Blu-Ray region was still at zero, and no region was selected and it is still not possible to change the regeion.

Corel cannot help me further and told me to contact the manufacturer of the Blu-Ray drive so that they send me a flash tool which allows me to reset the counter.

I am really tired of that. WinDVD somehow messed up my Blu-Ray region counter and now I have to see how I can reset it. Very bad software, very bad support.

Can anyone in here help me?
Top

When you played the blu ray discs in December which region were they? If they weren't region B then the player has been locked to the region those discs were from.

The blu-rays I played in December were also region B. I own solely region B blu-rays.

The player is not locked to any region, and still there are zero changes left, which I find weird. I have enclosed a screen photo. 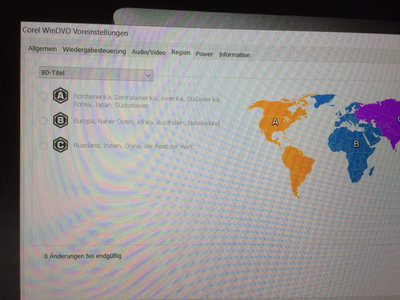 From what I've read all it takes is to uninstall the software but that is not working in your case so perhaps Corel have changed that part of the software.
I can only find this http://www.digital-digest.com/articles/ ... page4.html which may or may not work in your case.

I did a recovery of Windows 10. After that I had my 5 changes of the BR region code back and could set it correctly.
Top

Hi crew,
Having a problem with playing a region B Blu-ray on a computer running win 7 ultimate. with WinDVD Pro 12.
When I insert the disc, it loads ok but I get an error back saying that the disc is coded for region A or B and to eject the disc and play it on a region A or B player????
Yet if I power up another computer also running win 7 ultimate but an earlier version of WinDVD [pro 10] it plays with no problems.
All updates have been applied to WinDVD pro 12 but still no go

New to this forum and have posted a screenshot of the error - hope it shows ok.
DVD's play just fine.

Hi crew,
The region problem has been fixed. I now have a different issue on the same machine where it still wont play a blu ray, it comes up with a different set of questions with one of them wanting me to right mouse click on the control panel

I have pics but need to upload them to my web space. Will do that soon.
Cheers,
Pixels.
Top

Hi crew,
Couldn't find a way to upload the pics so I have made a video of the pics which I uploaded to youtube,
Here is a link to the video.
Cheers,
Pixels

Hi Pixels
Sorry you are having problems in playing your discs and apologies for missing your first post
I do not have Win DVD installed so cannot check on any settings
As for uploading pictures / images the forum does have a size limit, unsure what that is
From the bottom of your post is an option to Upload Attachments, follow that tab to locate a file, add the File and Finally place in line to the curser position.

The Youtube Video is very poor and unreadable, it does look like a Corel document, if so can you provide its URL.

As you appear to be able to use earlier versions of WinDVD and it is a problem with 12 then your best option is to contact Corel Support, we do not work for Corel.
I would suspect their first advice would be to re-install the program.
Regards Trevor
Top

Hi crew,
Thanks for the info on how to add pics to a post

They're not the greatest pics. 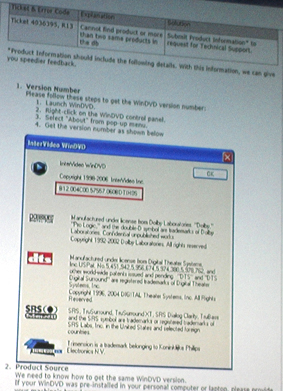 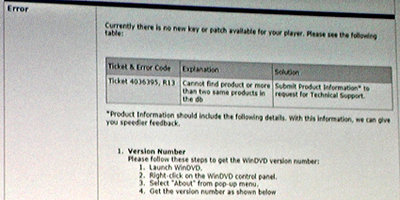 Hi Trevor,
Thanks for your help.
Was wondering if you could provide a link to be able to contact Corel Support.
Cheers,
Pixels


As you appear to be able to use earlier versions of WinDVD and it is a problem with 12 then your best option is to contact Corel Support, we do not work for Corel.
I would suspect their first advice would be to re-install the program.

I'm not Trevor but here's the link.

Thank you for contacting Corel Customer Support. My name is Austin and I have been assigned to your ticket.

There was a communication issue with the AACS Keypack server last week. I have it on good authority that the problems have been resolved.

This has fixed my problem, so a big thanks to everyone here and to Corel support.