has anybody faces such an issue?
Some of MP4 files (captures with OBS or Geforce experience) which are 1080p or 1440p and can be view extremely crisp in windows default player are muddy in VS2020. Not only in preview screen but also in render with the same specs of the initial file.
Last edited by cybernick on Tue Jan 19, 2021 12:02 pm, edited 1 time in total.
Top

Anyone please?
Can it be something with codec. Should I install a codec?

I consider to make a clean reinstall. Will it be enough to install sp4 file?
Also mine is update version should I need to install VS19 first?
Top

I did a repair installation. No solution.
To explain what I mean I have attached a zip file with two files.
The orijinal high res MP4 file and the rendered file with exactly the same specs in VS2020. You can see what VS2020 did to the file.
What do I miss. Please suggest.

Indeed it's crap as I always said. VS's mp4 is not good for animation. This is why I use only WMV when I have animation segment.
Top

Was is always like this? Because it was way better in early versions.
Or I did something and works like this?
Top

Hi Nick
I was a little concerned in comparing the original properties, I used Media Info
The video is using a variable frame rate which Video Studio does not get on well with, sometimes that is
There was also a reference to Pal which in its self not a problem but then the frame rate of 60 would indicate NTSC, so I was a little confused and did not understand if that would be an issue

Share – Same as First Clip to create a new video file which looks ok, lets say I can read the writing on the map
Better to use VLC Media Player, or any player other than VS

Post Updated to add sample video
I have not used Google Drive for a while, hopefully this link works
https://drive.google.com/file/d/1m6251E ... sp=sharing

I also changed/deselected the F6 Preferences – Edit – Apply Colour Filter, did not seem to change anything although a subtle change is difficult to compare.
At the moment the colour filter is set to NTSC, even though I am in Pal UK
Regards Trevor
Top

Can you please upload the file . I will also try the same.
Top

Hi Nick
Just updated the post, did not realise it would display there, had thought a download link?
Regards Trevor
Top

Ok I tested as you mentioned. No big change. Still VS2020 kills the quality of the media. Check this out

As you say no change there,
Did you manage to download the Lata Cybernic.mp4 sample on my google drive.

OMG your render is way better. How you manage to do that. Mine is still garbage.
As first video or as the project the output is the same buddy video.
Do you have any codec pack installed. Can it be something related to that?
Top

Just tried using Share – Same as Project Settings, this took much longer to render as though Smart Render is not being used, I think that may be the case.
Same good results, difficult to say if Same as First Clip with Smart Render is better quality or not?

Step by step
First is your program installed as Pal or Ntsc, I assumed Pal?

Maybe I need to reboot the computer to clear any cache files, strange that I can no longer render a bad one?
Regards Trevor
Top

lata wrote: ↑
Mon Jan 18, 2021 2:01 pm
Just tried using Share – Same as Project Settings, this took much longer to render as though Smart Render is not being used, I think that may be the case.
Same good results, difficult to say if Same as First Clip with Smart Render is better quality or not?

Step by step
First is your program installed as Pal or Ntsc, I assumed Pal?

I did exactly as you mention. First of all My Apply color fileter (pal/ntsc) was deselected. I choose NTSC anyway. And I exported as "same as first clip". No chnage. Terribly bad output.

I managed to get somehow usable output with mp4 custom share setting. With the following settings. Do you also use Ulead Mpeg-4 vio Driver?
As you can see I need to boost the bit rate to 65000 which caused the file size to become 300 MB. 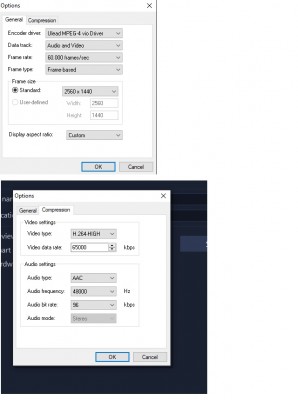 Yes the Ulead Mpeg-4 vio Driver? is available when setting the properties

When I first rendered the original video this morning the resultant video was as bad as your sample
I then tweaked my program settings to use NTSC thinking there may be a Pal / ntsc conflict
Then all renders were very good
I have since reset my program to my original Pal settings and still render good video
I have also booted up 2019 that should use the same setting as 2020, rendering using 2019 was good quality

so the first render was very poor, now I am completely confused as i can no longer replicate the poor video.
Regards Trevor
Top
Post Reply
20 posts