Hi, apologize in advance for possible newbie questions but recently downloaded X9 because X4 stopped working with my Win7 PC.
I tried to make a quick 3min slideshow mainly photos, a .mp3, and a short .mp4 with credits to end the video. The .mp4 glitches and pixelates with scrolling credits and music. How can I stop this? I have it smart proxied, though it's so small I don't think that's the issue?

Thank you in advance for your help!
Top

Welcome to the forum!

First off, we need to know the properties of the problematic mp4. Please right click on it either in the X9 timeline or library window and copy all its Properties here or take a screen shot of the Properties box and upload it here as an Attachment. You might also tell us where it came from. Some smartphones these days use a variable frame rate when filming their mp4 video, and this can cause problems in VS.
Ken Berry
Top

Thank you for your reply.
Here's the screenshot of the mp4 properties.
I recorded it on an iphone 5s. It doesn't seem to be an issue with win7 movie maker, but obviously I want to make my video with X9. 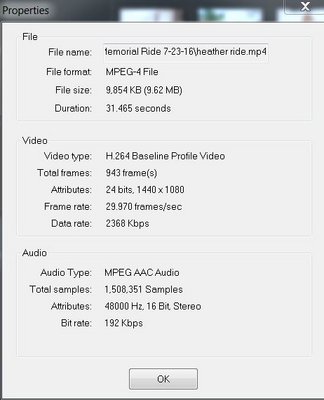 Thanks for that. That seems absolutely normal mp4 so it should not be causing any problems. I would also have thought that your computer should not need to use SmartProxy with it.

However, I should also have asked exactly what you are intending to produce your slide show as: a DVD? A Blu-Ray disc? Or just a final file which you can play on your computer or via a USB drive attached direct to your TV or DVD/Blu-Ray player?

Well those Project Properties seem to match those of the original video, which is good. Did you manually set those Properties or did it result from having "Show message when inserting first video clip into timeline" ticked in Preferences > General? In other words, did you get a message when you inserted the first mp4 into the timeline asking if you wanted Project Properties to match those of the clip, and you clicked OK on that?

Have you tried using the mp4 without SmartProxy enabled? Have you actually rendered the project into its final format or does the pixelation also occur there? Is there no pixilation when you don't have background music or rolling credits?
Ken Berry
Top

I did click yes to that message box that popped up once before.
Playing it alone - in a new project, It is fine if I play it as a clip but it glitches if played as a project even without any other items in the timeline.
In the original project, if I leave in the credits and the music, AND the sound on the mp4 I play the clip - No glitch. If I try to play the project, it glitches.
If I mute the mp4, it glitches in project and in clip.
If I take out the credits and the music, play the clip it's fine. I mute the video play the clip, it glitches, same in project play.
Not sure why muting the clip would have an effect on it?
Actually now I take this all back...I went back to the software and tried it again and not nothing changes it. It glitches all the time. No matter what I do or change. It seems the more I mess with it the more temperamental it gets.

I actually didn't notice the glitch until I rendered the final video and watched it back.
Top

As the quality issue shows on the final rendered video it could be any of your clips that is causing the problem.
You mention mp3, I assume that to be audio, the “mp3 lame codec” has been known to be problematic, we would advise converting the audio to Wav.

When you Share – deselect Smart Render to force a full render, will take longer to complete, see if that improves quality.
Regards Trevor
Top

Hello, tried WAV as you suggested, no change. When I double click on the thumbnail and it pulls up the single clip trim, the video plays fine but if I pull the scrubber manually it pixelates.
Top

I may be having a similar audio issue... fading one music clip out into another. It's smooth and clear in the timeline, but when I render there is a little glitch/static sound between the clips. one track fades out and the other fades in. I have always done it this way. I'm using mp3 but I also tried wav and same result. I tried separating the clips and still same result, I tried just have them touch, and same result. VERY FRUSTRATING... I'm stumped!

I tried attaching the file but I cannot attach this file type.. tried a few formats.

the sound is a static glitch..
Top

just did another test... took same clips and put on timeline in VSX8... rendered out the audio --- NO GLITCH!
Re-opened X9, rendered the audio and there is a glitch..

Any chance that this is related to my having installed X9 before X8? I have the weird set up of X9 64bit and then wanting to have X8 in 32 bit... ( reminder, using new blue transitions in 32bit in X8)

BTW -- another test, when you remove the fade in/fade out, the glitch also goes away.
Top

I also subbed the mp3 file for a wav file, and turned off the smart render. It didn't change the result -- this is really odd!
Top

Are you doing the fade in and out using the controls on the attributes window; or manually adjusting the overlapping audio lines in audio view using rubber banding?
Ken Berry
Top

Both. Have tried all scenarios.

My next tests are gonna be
1) start new project file and see if still happens with same audio files. If so then..
2) try ripping same tracks in fr cd. This is my normal method. Then the format is ulead cd wav?

In all fairness i did use mp3 for this project. I dont normally... Sometimes one track on my timeline is mp3. The rest are ripped fr cd. In this project I have 7-8 mp3s on the audio track. Not sure if others audio files affect the output when im just rendering a 2 second clip betw tracks? Could this be the issue??
Top

I went back to my project, burned a cd and ripped in all the tracks of that project --- replaced all the mp3 tracks with wav files.. the first 4 songs, I had no blips betw tracks... further into the project I started to get the blips again. no rhyme or reason. I've rendered many times, separating the tracks, trying fade in/out, crossing the tracks.. one fade out off, one fade in turned on.. every scenario and still a little static blip betw the tracks. To answer your earlier question, I am making fade selections from the audio panel, not adjusted on the timeline, although have tried that too.. if you open up the audio tracks they show fade in/out...

beyond puzzled -- this is a real issue!
Top
Post Reply
27 posts